The connection, the collaboration of a group of people in order to achieve an artistic result that will arouse the nervous system of the recipient, is a balance between acceptance and initiative.

Spyros Manesis grew up in Zakynthos. He loved Beethoven and The Beatles. Later he found his way to Dr. John, and the path to Brad Mehldau, Keith Jarrett and Paul Bley includes many episodes. Arionas Gyftakis grew up in Kalamata. He learned the secrets of music at an early age and when he first heard double bass playing in a jazz group, he knew that his studies in music would go in that direction. Anastasis Gouliaris grew up in Athens, in Peristeri, and among the streets of urban life the music of Tom Waits introduced him to jazz for the first time.

Three components found themselves with the same teacher learning jazz improvisation. A real collaboration began, exploring at first the jazz standards and the limits of their transformation for personal expression. In 2017 they released their first album "Spiral Trio", played in jazz clubs, toured Greece, Spain and Portugal, and this musical experience strengthened the trust and communication between them.

The modern approach of the great "company" of Paul Bley, Keith Jarrett, Paul Motian, Bill Evans, Jack DeJohnette, Gary Peacock, Steve Lacy, etc. is what the trio has accepted over time as their musical identity and direction.

Interplay is now becoming an important element of their performance style and as the musicians mature this happens with greater clarity and focus. They explore the spaces that their music makes and it is through these that the original compositions emerge that now form the largest part of their repertoire, which is recorded in their latest album "Broken Blue" (2022, Odradek Records). They play at major festivals in Greece and test their compositions in jazz clubs and on tour.

From 2014 to the present day the members of the trio have shared the stage, a car full of instruments on tour, the studio, the rehearsal, the nervousness before a big live gig, the insecurity after a bad gig, the different expectations, the different speeds, the different circumstances of life, the feeling of shared success after a good take in the studio ... and balance arises because someone accepted something they might disagree with and someone else took the initiative to lead when they felt confident inside. 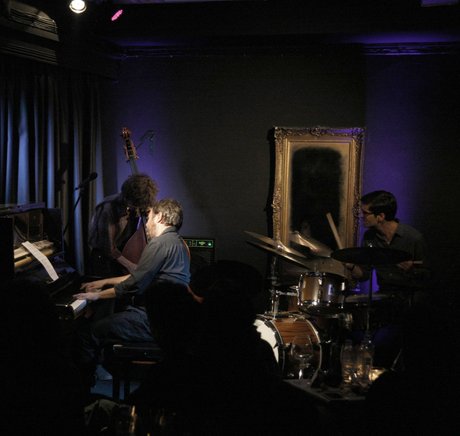